It is quite difficult for a child today to imagine what these magic words meant fifty years ago. 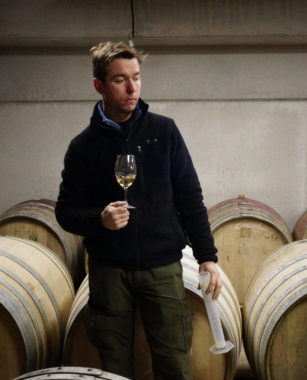 As children of the post-war period, we evoked this time as that of a paradisiac future, embodying for us the very notion of technical progress, symbolising an ideal world, this orange-coloured world of which Aragon spoke about, a “modern” world where nothing would be as it was before, a world where we would be liberated from our burdens and our limits, our pettiness and our contingencies…

The end of the 90s embodied for many French winegrowers a period when everything seemed possible and as far as we were concerned, freed from our southern winegrower complexes, leaving the Banyulenc enclave, and set off,  some from La Rectorie (where we all worked at the time and which is now managed by Thierry and Jean Emmanuel Parcé) to explore the north-western part of the Roussillon region, moving away from the Mediterranean shore, in order to establish a “foundation” there.

The Hautes Corbières du Roussillon, as it was called until 1972, was home to a small village and winery on a plateau south of the village of Maury, which would welcome us after a successful experiment at the Maury Cooperative Cellar for the 2000 vintage. During this harvest, we created a trial red wine for the cellar with a vision of a future AOC on this terroir, which, at the time, only produced VDN (sweet wines). Vincent Legrand was at the head of the project and deployed his usual energy to bring it to a successful conclusion.

Thanks to this experience, the team of La Rectorie, reinforced by a young winemaker and two more experienced winemakers, acquired the cooperative cellar of St Arnac in July 2001 in order to establish a winemaking site in the Fenouillèdes, near the Maury cru. There, we aimed to experiment with the particularities of the Maury terroir by applying the same requirements and discipline as we had done at Domaine de La Rectorie. For ten years we tried, both in the vineyard and in the cellar, with modest means, to get the greatness out of the silent! Once again, as at La Rectorie, the absence of means was our guide, the absence of a guru our credo!

At the same time, friends helped us and surrounded us with their advice and their…friendship, which was very necessary in these moments of struggle that the birth of a small independent production unit represents!

Of course this experience of great human wealth was not easy every day and I understand that some of us got tired of it, but when I look back on the first ten years, it appears to me more than ever that the name chosen, the name given, really corresponded to this experience: La Préceptorie* was a foundation of La Rectorie in Maury.

Etymology is a fascinating science and in certain cases it can be linked to the work of analysis and psychoanalysis, Master Lacan is not far away. To name a thing, a being, is to recognise it, to give it birth, to give it life. In the New Covenant, it is not by chance that one of the apostles begins, wanting to name the One who cannot be named, by saying: “In the beginning was the Verb…”. And if etymology allows us to unravel the historical meaning of the birth of the word from its origin, the very choice of the word to designate a story, a project is not neutral.

For various reasons, not all those who lived this “adventure” have remained, but they have all made their contribution to the building and it is too early after nearly twenty years to draw all the conclusions, but the work is there and the production of white, rosé and red wines as well as the VDNs (sweet wines), attest to the progress made in understanding the expression of the Maury terroir, without any fuss. It is thanks to all those who have worked on this project – which some might describe as utopian – that they have filled it with their desire and their will to transform their dreams into reality despite all the failures, the imperfections of some and others, the abandonments, the exhaustion. The path we have covered in nineteen years has enabled us to make the necessary, indispensable adjustment in order to distinguish between things and people, between dreams and reality.

I don’t think that reality is any less beautiful for that. Joseph Parcé and his wife Amandine arrived for the 2007 harvest and took care of the estate until 13 December 2016. The construction of a new cellar in St Paul will remain the defining element of their management.

Today, although Marc is still present, it is the new generation of the “Parcé brothers” Martin, Augustin & Vincent who are in charge.

*The Preceptorie (preceptorum domorum milicie Templi) or House (domus Templi) was a centre inhabited, by a small community, which brought together the three essential functions of a monastery house, a fortified post and an area of agricultural exploitation.